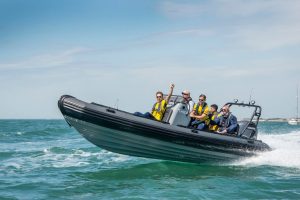 Fresh from their Royal London Cup win at Lords, a group of Hampshire’s finest cricketers were treated to a blast round the Solent, thanks to the Boat Club at Trafalgar Wharf.
Players from the ageasbowl-based club travelled at up to 35 knots on three specially-built Ballistic RIB boats.
“It was great to welcome the team down to Trafalgar,” said Jonny Boys, Managing Director at the Portchester shipyard. 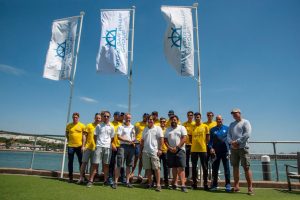 “Elite sportsman appreciate a day away from training to refresh their batteries and there’s nothing quite like a spin on The Solent under blue-skies to freshen things up.”
Some of the team that went out had never been on The Solent before. Players James Vince (Captain), Tom Alsop, Rilee Rossouw, Sam Northeast, Ian Holland, Lewis McManus, Gareth Berg, Chris Wood, Kyle Abbott, Colin Munro, Mujeeb Ur Rahman, Jimmy Adams all took part in the event. 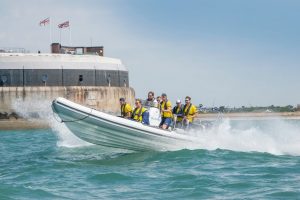 The team, who beat Kent by 61 runs to lift the Royal London One Day Cup last weekend are now lining up for the T20 Vitality Blast tournament.
“We’re delighted to be supporting our local county team,” said Jonny Boys.
“Let’s hope that they are successful in The Blast. And if any cricket fans want to come down and have a look at our boat club, they are more than welcome.”
“I am sure we’ll be seeing some of the players back again.  Boat Club Trafalgar is ideal for them as they can have a fast blast on a RIB, or take their families and friends out on a day cruiser. They’ve got all the choice they could ever need, without the hassle of ownership.”
For more information head to http://www.BoatClubTrafalgar.com  or email Steve@boatclubtrafalgar.com or call 02392 706599
Contacts

© 2020 The Trafalgar Group All rights reserved.
Trafalgar Wharf Limited: Registered in England & Wales;
Registered Office: Midland House, 2 Poole Road, Bournemouth, Dorset, BH2 5QY Vat No. 942 7079 08 Company Number 6671758
We share heaps of really useful stuff every month,
leave your email to be included…
Click to enter email
X
We use cookies to enhance your site experience, improve our understanding analysing our site traffic finally to enable social media features.
By continuing to browse, closing this banner, scrolling or clicking a link you agree to the use of cookies.AcceptRefuseCookie Policy
Revoke cookies