The Phoenix has risen

Over the winter Trafalgar Drystack was used to test a prototype of an unmanned aerial vehicle (UAV) called Phoenix.

Designed to stay in the air indefinitely using a new type of propulsion, this airship with wings is a joint project involving five UK universities and three industry partners. 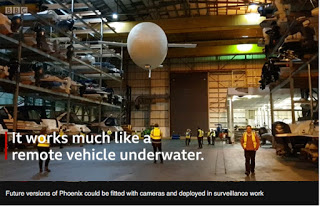 The prototype Phoenix was successfully tested inside the drystack’s huge indoor space to protect the aircraft from the winter winds – although production versions would operate in all weathers.

It is hoped this technology could be used in the future to launch satellites into space or deployed in disaster relief and border control.

BBC News recently featured the Phoenix project with video shot during its trial at Trafalgar Drystack.

© 2021 The Trafalgar Group All rights reserved.
Trafalgar Wharf Limited: Registered in England & Wales;
Registered Office: Midland House, 2 Poole Road, Bournemouth, Dorset, BH2 5QY Vat No. 942 7079 08 Company Number 6671758
We share heaps of really useful stuff every month,
leave your email to be included…
Click to enter email
X
We use cookies to enhance your site experience, improve our understanding analysing our site traffic finally to enable social media features.
By continuing to browse, closing this banner, scrolling or clicking a link you agree to the use of cookies.AcceptRefuseCookie Policy
Revoke cookies